Why Guyana has become the new Oil Dorado

Sir Walter Raleigh thought he had found El Dorado – the City of Gold – in what was known as Guiana in 1595. He had not. Darren Woods, boss of Exxon Mobil, has found it in 2022. Black Gold.

Guyana – as the country is called now – is the new Oil Dorado with oil gushing out of its deep sea offshore by the tanker-load. Billions and billions of barrels in the Stabroek field alone.

Eleven billion found to date and rising. Thirty-three wells up and running after just three years. A 90 per cent success rate in finding them.

Flying the flag: The Liza Unity FPSO (floating oil refinery) is pumping oil from below the Atlantic in the Guyana Basin

Guyana is a new world oil power – by 2035 it will be producing more offshore oil than the USA. Profitable too – the cost of production at $25-35 per barrel of sweet Brent crude is way below the current world price of $94.

In a world with energy supplies under threat thanks to the war in Ukraine and sanctions on Russia, Guyana is the new jewel in the crown of world oil.

How did this Oil Dorado come about? It is only seven years since oil was first discovered in the Guyana Basin.

Yet today there are two huge floating oil refineries, and soon a third, pumping oil from below the Atlantic.

But the production deal struck in 2016 was not very advantageous to the Guyanese. A royalty rate of just 2 per cent.

Despite that, the economy has exploded by close to 50 per cent this year thanks to oil, and by 2025 Guyana is projected to have the highest per capita income in the world – one barrel of oil per day for the 700,000 population, an estimated total revenue of $350billion over the lifetime of the Guyana fields.

There are still big questions, however, of how much of the oil riches will trickle down to the ordinary Guyanese. 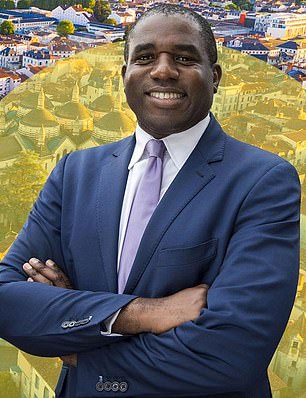 On board: Shadow foreign secretary David Lammy is of Guyanese origin

There is, like Norway, a sovereign wealth fund headed by Major General Joe Singh, a highly respected former head of the army, and whose board includes shadow foreign secretary David Lammy. He is of Guyanese origin and visits regularly.

The Natural Resources Fund had $1bn in the locker earlier this year but that is being raided for big infrastructure projects like a hydro-electric scheme, roads, bridges and investigating moving the capital away from the flood-prone coast.

The Atlantic could at any time over-run its coastal plain where most of the population live. Hence, the search for a new inland capital.

The people are seeing some changes too. More and more former sugar lands – that industry is not so slowly dying – converted to house lots, hand-outs for education costs and more.

In this Oil Dorado, money is no object. The 42-year-old Muslim president Irfaan Ali can afford to be munificent.

He and his PPP government will be in power in this deeply racially divided society for at least another eight years, maybe longer.

Guyana was a Dutch colony until the 19th century. The ‘Dutch disease’ – when an event such as the discovery of large oil reserves can inadvertently harm a country’s broader economy – brought by oil may soon be on its Atlantic foreshore.

It may mean too much money circulating, high inflation, an import boom and worse, corruption. Guyana has never been free of sticky fingers even when a poor country. Temptation is there in barrel loads now. 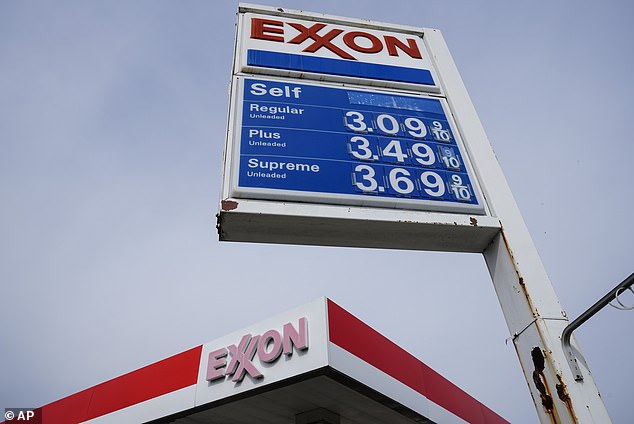 Drilling rights: US giant Exxon Mobil has discovered billions and billions of barrels  of oil in the Stabroek field alone

Other countries are beating an oily path to its borders. In July, the Saudis sent a Boeing 777 full of investors and officials to explore opportunities. President Ali has been to the Middle East.

The Chinese have a 20pc stake in the Stabroek field. British Airways is resuming regular direct flights from the UK next March. Guyanan oil lawyers are setting up offices in the capital Georgetown.

Progress is plain to see on the East Bank of the Demerara River where massive shore bases have sprung up, built by the likes of oilfield services company Schlumberger.

Likewise, new, usually American-branded hotels are sprouting in the capital all around the colonial architecture left by the British and Dutch. But it is the USA that is in pole position in Oil Dorado.

In the Marriott Hotel in Georgetown, American accents are prominent. The US State Department takes an active interest.

In 2020, then Secretary of State Mike Pompeo was instrumental in stopping a stolen election by the previous government. 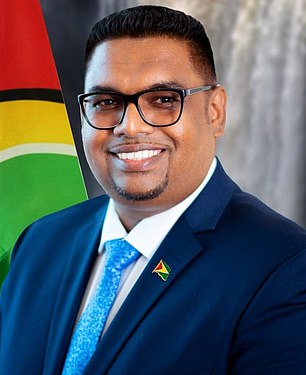 Meetings: Guyanese president Irfaan Ali (pictured) has recently been in the USA

President Ali has recently been in the USA, granted audiences with Vice President Kamala Harris and Secretary of State Antony Blinken.

The new world calling. With neighbouring Venezuela, another very oil rich state, now out of the US orbit and sanction bound, America needs the oil from Guyana.

The world does too. Exxon Mobil and the Guyana government have little difficulty in selling their million-barrel monthly lifts on the world market.

The future is bright, especially once the gas from the oil fields starts to come ashore thanks to the $1billion pipeline being built.

That ought to ensure cheaper and more reliable electricity for the people and manufacturing after the oil runs out.

Today, more than six decades after independence from the UK, there are still regular blackouts.

But, on the darker horizon is the racial divide that has eternally plagued the country. African slaves freed from the sugar plantations went to free villages and urban settlements.

Prosperity has not been their legacy. Indian indentured labour brought in to replace them built up their personal capital and businesses. Today they dominate the local business world and the politics.

The president’s PPP is an Indo-Guyanese party. The opposition PNC is largely African Guyanese.

Ali, with his ‘One Guyana’ policy, faces the uphill eternal task of uniting all the races to work towards this new Oil Dorado.

The sweet Brent crude, meanwhile, gushes out of the Atlantic Ocean and to the world. Sir Walter Raleigh would find it hard to believe. Black Gold has been found.

Some links in this article may be affiliate links. If you click on them we may earn a small commission. That helps us fund This Is Money, and keep it free to use. We do not write articles to promote products. We do not allow any commercial relationship to affect our editorial independence.

Construction to begin on seven new hospitals in Guyana