All southbound lanes of Highway 101 near Trinidad are currently blocked after a fatal collision occurred just before 3 p.m. today, September 22nd.

The CHP Traffic Incident Page listed a three-vehicle traffic collision on Highway 101 near Westhaven Drive involving a red Ford Mustang, a small sedan and another vehicle that was not described. Reporting parties told dispatchers that several subjects were in the roadway attempting to flag traffic.

One party was reportedly trapped inside one of the involved vehicles. Scanner traffic indicated that an air ambulance was requested but was cancelled after the fatality was confirmed. Another patient is reported to have moderate injuries.

The coroner has been notified. 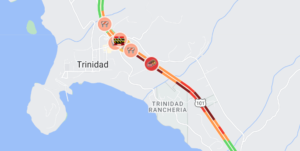 Please remember that this story is unfolding. Information is being reported as we gather it. However, some of the information coming from witnesses and initial official reports could be wrong. We will do our best to get the facts but, in the case that something is inaccurate, we will update with correct information as soon as we can.

UPDATE 5:04 p.m.: Traffic is crawling through the area in both directions, according to Caltrans QuickMap. A reader sent us these photos from the scene.

Caltrans slows traffic at the scene of the accident. [Photo provided by a passerby]