Tropical Storm Warning For Aruba But Passing Before Getting Named

by Staff
in Aruba, World
0

The storms is passing Aruba this evening, much earlier than expected and it has not been named yet. I have included a Live Windy Widget over Aruba below, for our friends vacationing there.

For a few days the storm across the southern Caribbean and Venezuelan coast has been referred to as Potential Tropical Cyclone Two.  All forecast guidance and The National Hurricane Center expected this to likely be upgraded and named Tropical Storm Bonnie today.  I also said it would happened for sure today, but it has not happened, yet. There is an explanation as to why.

A little confusing: In the latest update from The National Hurricane Center, they have mentioned

but still does not have this named a tropical storm.

However, Tropical Storm Warnings remains in place for Aruba and Curaçao as it is passing through Wednesday evening. The Meteorological Service of The Netherlands has discontinued the warning for Bonaire.

If you have seen the earlier forecast, this is more than 6 hours ahead of schedule. That fast forward speed to the WEST at 21 mph is part of the reason for the stalled intensification. It also means it will be out of to the West sooner, but thunderstorms may linger on Thursday.

With sustained winds near 40 mph, that is the minimum for a named Tropical Storm. While it is not there yet, it is still expected to be named and grow stronger. That is why a Hurricane Watch is in place for the coast of Nicaragua and Costa Rica.

Here we can see the center circulation got some dry air entrenched, which also limited the production. No complaints from the vacationers.

At 8 PM The National Hurricane Center posted this intermediate advisory with sustained winds of 40 mph/65 Km/Hr.   That is still right on the edge of qualifying for an upgrade to a named Tropical Storm.

This will be intensifying over the next few days, as it tracks towards Central America on the Nicaragua coast.  It could still possibly cross over and survive into the Pacific. If so, then it would get a different name in that ocean basin. 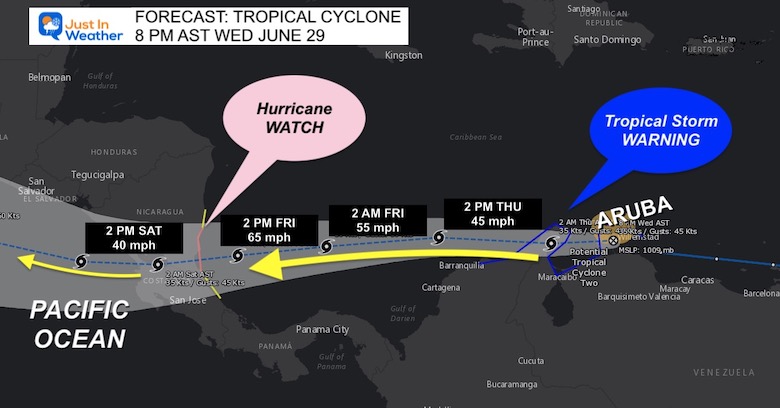 On the forecast track, the system will pass across the southern Caribbean Sea and near the northern coast of Venezuela tonight, near the Guajira Peninsula of Colombia early Thursday and over the southwestern Caribbean Sea later on Thursday and on Friday. The system is expected to be near or over Nicaragua by late Friday. That is where the Hurricane Watch has been posted.

Our system in question is over the lower right of the loop.

The general consensus of the computer model guidance shows this tracking nearly due west. So, no threat to the US and skirting the northern coast of South America then into Central America.

Again, if this does hold together in the Pacific Ocean, it would be renamed due to being in a different ocean basin. The long range has this remaining off the coast, but could bring high waves to resorts like Acapulco. 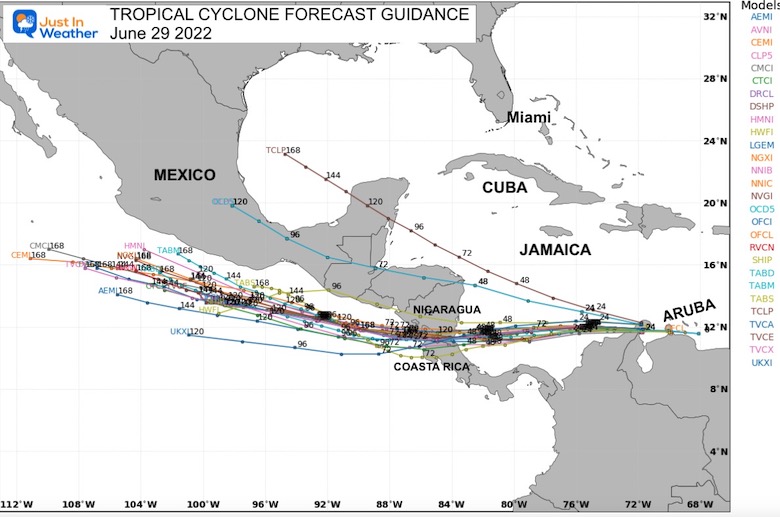 The chance of Bonnie for Bonaire has been removed!

This is still a potent little system, but appears to have the minimal impact on the ABC Islands.

Pinch to pan and zoom the view, plus toggle the forecast timeline. May 22 Hail And Wind Damage *Disclaimer due to frequent questions:

I am aware there are some spelling and grammar typos. I have made a few public statements over the years, but if you are new here you may have missed it:

I have dyslexia, and found out at my second year at Cornell.  I didn’t stop me from getting my meteorology degree, and being first to get the AMS CBM in the Baltimore/Washington region.

I do miss my mistakes in my own proofreading. The autocorrect spell check on my computer sometimes does an injustice to make it worse.

All of the maps and information are accurate. The ‘wordy’ stuff can get sticky.

There is no editor that can check my work when I need it and have it ready to send out in a newsworthy timeline.

It’s part of my charm.

Trinidad and Tobago right to be on high alert for storm

Trinidad and Tobago right to be on high alert for storm

Tobago On The Alert | 7pmnews