The Caribbean Development Bank’s infra bets in Antigua and Barbuda

by Staff
in Barbuda, World
0

The Caribbean Development Bank (CDB) has awarded seven consultancy contracts this year that combine US$1.8bn in loans for Antigua and Barbuda’s transport sector and involve reconstructing and rehabilitating infrastructure that has been damaged by natural disasters.

The contracts are part of plans for four of the nine projects the bank has approved for the islands, according to CDB’s portfolio. Information on tenders for the other projects was not made available.

According to the bank’s procurement website, two consultancy contracts have been awarded to local firm Engineering and Plus and Canada’s CBCL for the US$2.5mn reconstruction and rehabilitation grant to enhance the resilience of Barbuda’s electricity system.

Another consultancy contract was awarded this year to Bahamas’ Caribbean Civil Group for the US$28mn road rehabilitation program that involves works on the Royal Gardens Road and Herbert’s Main Road.

For the second stage of that road program, which received US$65.6mn from the bank in 2016, three contracts have been awarded to Italy’s Fred Engineering, local firm Anne Harewood-George, and St. Lucia’s Dennis Cudjoe.

A seventh contract was awarded to Andrew Jeffrey from Guyana for consulting in the US$34.5mn rehabilitation and reconstruction support project for infrastructure damage caused by hurricane Irma. Approved by the bank in 2017, the loan is planned to help “reconstruct a bridge and several roads; repair, retrofit and reconstruct several education facilities and teacher accommodation; construct a desalination plant and water storage tank; and rehabilitate and construct agricultural infrastructure.”

CDB is one of the islands’ most active project finance provider.

According to its 2021 report, the bank approved US$23.3mn in loans for Antigua and Barbuda last year, representing 45% of the total distribution of loans approved in that year. 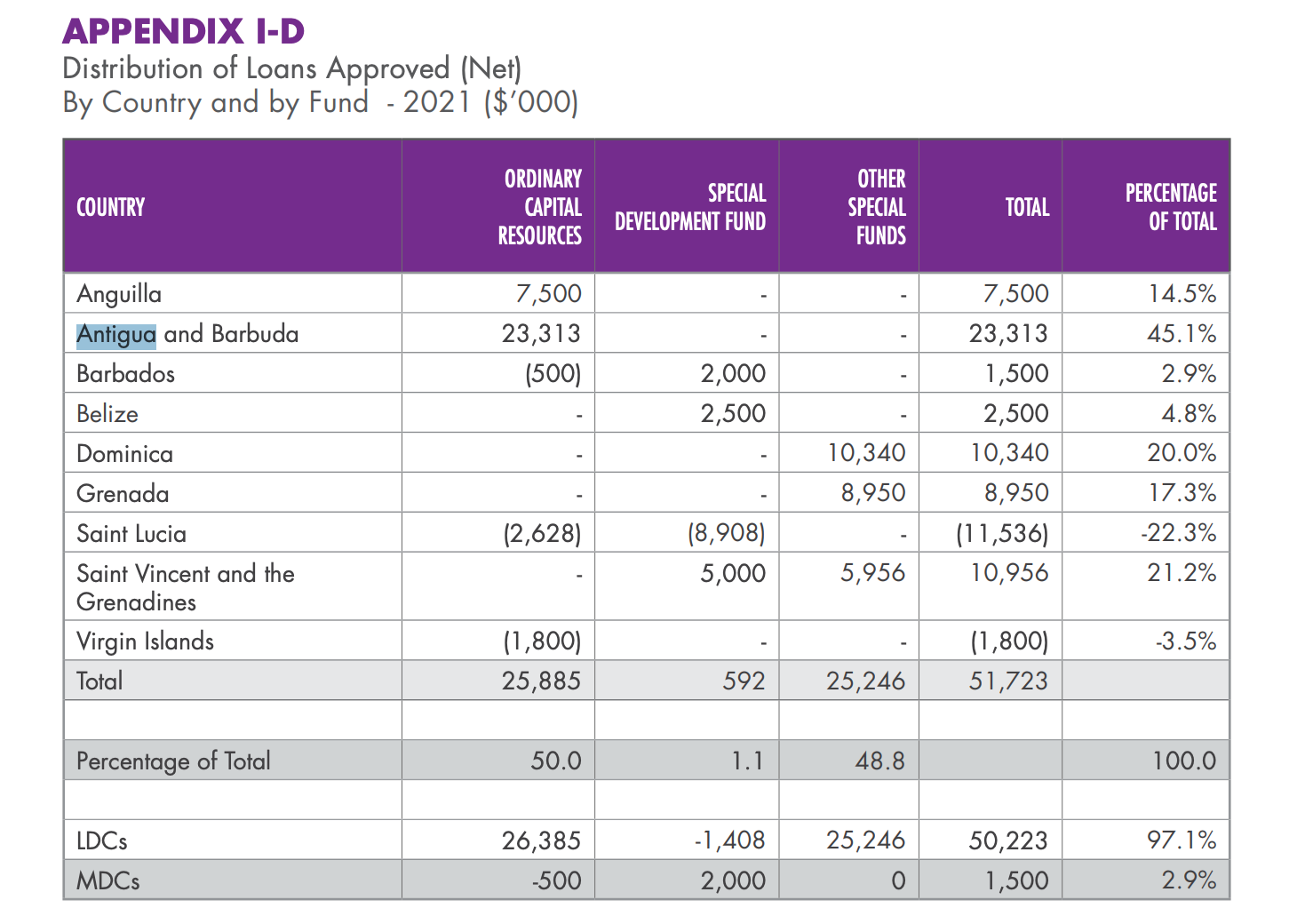 Most funds went to communications and transportation, according to the report.

Also, CDB awarded last year five construction and water and sanitation tenders for similar infrastructure works, two less than what it awarded in the first quarter of 2022.

Antigua and Barbuda is not a member of other major development banks such as IDB and CAF.