After a two-year, COVID-induced hiatus, the lead-up to Trinidad and Tobago Carnival, which takes place on February 20 and 21 this year, is in full swing, with party-goers making the round of fêtes and other must-attend events. As any seasoned Carnival enthusiast will tell you, it’s a marathon, not a sprint.

To get herself in the Carnival frame of mind, writer and cultural worker Attillah Springer tweeted a list of affirmations, which a friend, designer Ayrïd Chandler, made into a graphic, which then began to be even more widely shared on several social media channels. 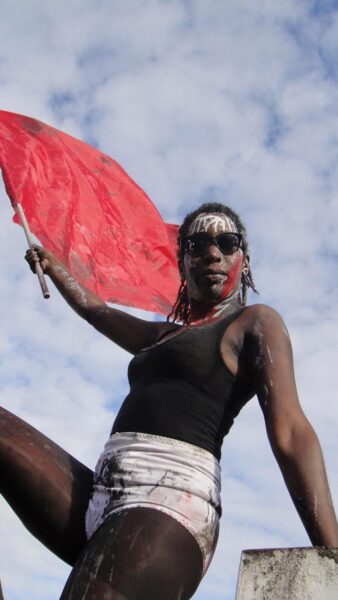 Attillah Springer waves a flag atop a wall one Jouvay Morning a few Carnivals ago. Photo by Roba El-Essawy, courtesy Springer and used with permission.

Via WhatsApp, I interviewed Springer about the significance of the affirmations, and her reverence for Carnival in general.

Janine Mendes-Franco (JMF): Tell us about your overall inspiration for the Carnival affirmations and why you feel revellers need to hear them.

Attillah Springer (AS): I was up at 5 a.m. getting ready to face a day of planning for the various things I’m involved in for Carnival — I have a few things I’m working on for Wajang Diskotheque as well as my family is responsible for planning and staging Kambule (a play written by my mother Eintou Springer that is set in a barrack yard on the night before the 1881 Canboulay Riots). This is the time of the day I set my intentions, talk to my ancestors and maybe find something uplifting to listen to. I did a couple quick searches on iTunes and YouTube, hoping to find some recording of affirmations that could help me focus on the tasks ahead. But I couldn’t find anything that was local/Caribbean or speaking directly to the kind of day I thought I would be having. I started thinking about Carnival affirmations and so I typed a few on Twitter and within minutes people started responding.

JMF: Explain the inherent joy that is Carnival expression, in the context of the restrictions that have been placed on us these past two years.

AS: We were all forced to live with the sobering reality that we are in control of absolutely nothing in the past two years. In those long terrible hours of isolation many of us realised that as humans we need to connect to each other, to play and grieve, to mark moments in time. We missed the rituals around the celebration of those visceral, primal feelings of being alive, of moving our bodies with abandon, of sharing a moment when we don’t have to focus on the inevitability of death and taxes. I think that’s what we missed the most about Carnival and no amount of ‘un-safety’ will stop us from seeking out those moments of joy again.

JMF: Speaking of “mass liberation,” how does it feel to be free in the Carnival space, and what goes into it that makes the experience special?

AS: From the Jammette Carnival/Kambule point of view, Carnival is really a celebration of Emancipation. So Carnival for me is always about challenging what freedom means. Free in your body, free in your mind, free to make choices about how you worship or celebrate the important milestones in an individual or community’s existence.

JMF: A few years ago, Global Voices did some stories on both body shaming and empowerment of women in the Carnival space. Why is it important for women to be themselves no matter what, and what do you think of the sometimes impossible beauty standards expected of women?

AS: I think in a society that is so conservative and unforgiving of women in so many ways, it’s important to use Carnival as a space to re-assert body autonomy. It’s further complicated by the fact that we have another layer of desirability, respectability politics happening, where working class Black women’s bodies are framed as vulgar and light-skinned middle class women’s bodies are framed as sexy. There’s a lot for us to unpack but the idea that everyone’s body has space within the Carnival is something that we need to lean into.

JMF: Why do fence/wall/truck climbing and Carnival go together so well?

AS: It’s about subversion of barriers, testing strengths and surpassing what you’d be able to do on a regular day. The wall also is a great vantage point to see and be seen!

JMF: For non-Trinidadian readers, explain what wining is.

AS: Wining is the movement of the spine and pelvis is rooted in the dances of Central Africa (Congo) where many of our African ancestors came from. Wining is as much a story as it is a form of healing, as well as a dance of defiance. Earl Lovelace in ‘Salt’ talks about women during enslavement raising up their clothes and shaking ‘their melodious backsides’ in the faces of colonial authority. So every time I wine, I am connected to a story of resistance.

Also, if you need a refresher, we have two more Mondays left of our Wajang Winery Workshop at The Wajang Diskotheque.

JMF: You describe Trinidad and Tobago as “the land of oil and music.” Our country may be known for those two things, but, save for the genesis of the steel pan, they seem a bit disparate. What connections do you see?

AS: I’m borrowing from the song by Machel Montano and David Rudder, but also reminding people that even though our leaders still lean on extractive industries for development, it is really through our culture that we will find our way.

JMF: In many Carnival spaces, the focus has shifted from being more elemental and participatory in nature to being more voyeuristic and Instagrammable. While there is room for both experiences, explain why you choose the sneakers over heels/jouvay over “pretty mas” approach.

AS: Well, one is the jammette yard and the other seems to have taken on tones of the governor’s ball, where you must have a certain level of resources and access to be even be invited in. I still struggle with finding myself in the governor’s ball, I don’t really see how I belong there with all the rules and rope. The jammette yard in many ways is multi-generational, queer friendly, loud but also has rules and order and respect for those who are deserving.

JMF: Why do you always take care to spell the opening of the ritual in the wee hours of Carnival Monday “Jouvay” and not “J’Ouvert”?

AS: J’Ouvert is the standard French version. But there is nothing standard or French about Jouvay. In claiming the Kreyol spelling I am centering the people who created it, cradled it and fought for the right to have their Jouvay.

JMF: One more time, for the cheap seats in the back, explain why is it a woman’s right to wine in whatever way she chooses and still not be “asking for it.” You’ve done a lot of activism work in this regard, including a few Carnivals ago with the message in Calypso Rose’s “Leave Me Alone.”

AS: Women have so many levels of security they have to implement to simply get from point A to B without being physically or verbally harassed, Carnival then becomes a time when we feel we should have a different kind of grace. I guess we’ll be having conversation on this until society in general lets go of the idea that somebody else other than the woman who is in the actual body controls it. Either that or women start to physically retaliate, which I’ve also been seeing a lot more of lately.

JMF: How does Carnival affirm you?

AS: I’m in my full powers at this time. As a cultural worker, I feel like everyone is at their peak and the energy from every pan yard, mas camp, band room is so palpable. I feel like if we could put a name and value to that series of emotions we feel, we wouldn’t need to be so dependent on oil and gas anymore.