DONOVAN Mitchell, mayor of Mandeville in Jamaica and chairman of the Manchester Municipal Corporation, is becoming uneasy, as his niece Kimalee Larmond John remains missing in Trinidad.

She was last seen on November 19.

A police report said John, a 32-year-old security guard with Umbrella Security Services, left her home at Orange Field, Chase Village, Chaguanas, around 5.40 am to go to work at a warehouse complex on Mission Road, Freeport.

The morning she went missing, a company vehicle was waiting to pick her up at the junction.

Relatives said she told the driver she was on her way, but never showed up.

He said he hadn’t spoken to John in a while.

“But when she was in Jamaica I spent time with her.

“I’ve been to Trinidad a few times on business and I really know what is happening. It’s a concern for us at this time, especially her father. He is having a lot of ifs and buts.

He said he had not spoken with the TT police, but the family ws in contact with them and he had been talking to the Jamaican high commissioner.

He said he was also in contact with alderman and chairman of the TT Association of Local Government Authorities Anthony Roberts, as well as the Hunters Search and Rescue Team.

“They have been doing work and giving us whatever information they have.”

John’s sister Shinelle Stewart pleaded with anyone with information to come forward.

“She’s extremely driven and hardworking, (and) would not be the type of person to just run off leaving her responsibilities. Also, pleading to the public that if they know or have any information, please contact the police or the rescue team led by captain Vallance.”

She said John never told her about any grievances with anyone and it was unlike her to disappear without a trace.

“She’s never stated to me personally that anyone was threatening her, based on our last few conversations.”

John’s husband, who is Trinidadian, is devastated and has been in constant contact with her family since John went missing, Stewart said. 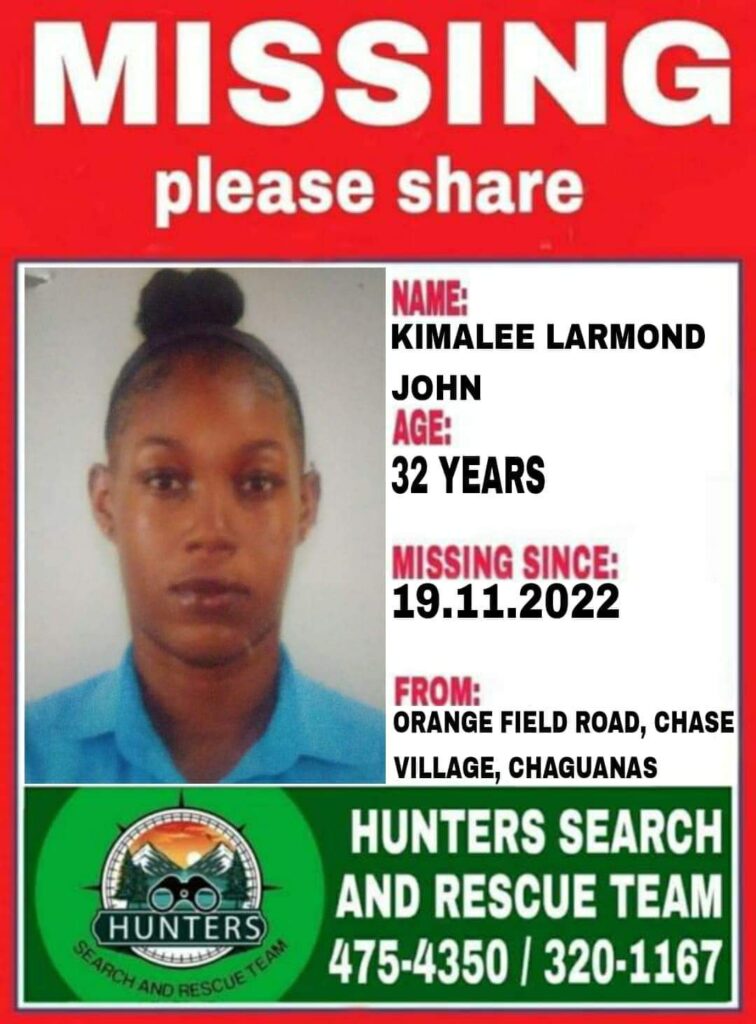 “The last time I spoke to my sister on the phone was on Sunday the 13th of November.

“Kim lived in Trinidad for roughly six years. She has always been consistent with work and all her goals, and has never …thought of running away.

“Her family and friends are currently in agony and so much pain, because we know her character and how hard she works for the things she has, and building relationships with close ones around her. She is not deserving of this, and because we know this, we are left heartbroken and almost speechless.”

Stewart said she is concerned by the police’s lack of urgency in searching for John.

“Now that the media has brought the news to everyone, the police are now forced to push the case much more efficiently.”

Information can also be given through the TTPS app.