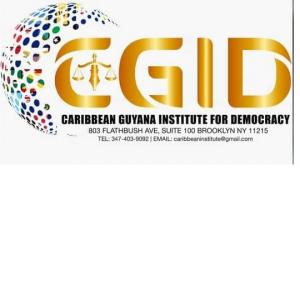 Similar to the Congressional Black Caucus, the Diaspora is the conscious of the people, never again will we allow our people to be massacred while we sit idly by and look.”

WASHINGTON, DISTRICT OF COLOMBIA, UNITED STATES, August 1, 2022 /EINPresswire.com/ — Manchester Reports Director of Communications, Vincent Mason, speaks with the Caribbean Guyana Institute for Democracy (CGID) President, Rickford Burke, an international law and public policy consultant and a democratic political strategist. Mr. Burke has held positions in government in Guyana and the United States and has worked in Corporate America. Rickford is a human rights advocate and staunch proponent of the empowerment of Caribbean, Caribbean-American, and Afro-Guyanese communities. CGID is a foreign relations, good governance, and human rights think-tank. As such, Mr. Burke is non-partisan in his critiques governing parties in Guyana.

Questions: Mr. Burke, welcome and what would you like to say about the current situation in Guyana?

Answer: Thank you very much for having me. The nation of Guyana is a small nation with 808,000 inhabitants. We are now an oil producing nation. Over the last 30 years we have had some unstable times with violence and massacres but we hope that these resources will create stability and add to the development of the country’s physical infrastructure, improve trade within the Caribbean, its South American neighbors, and the United States. Real GDP Growth is forecast to be 47.2% this year and Per Capita GDP is projected to rise as per the International Monetary Fund (IMF), World Economic Outlook Database, the citizens and not the few should benefit.

Question: What is the political situation in Guyana and why is the trip to Washington important?

Answer: Going back 30 years and beyond, political parties have been operating along ethnic lines in Guyana. The ruling PPP/C party traditionally has been supported by Indo-Guyanese and the opposition APNU coalition draws support from an Afro-Guyanese base. The current administration’s policies are questionable and is dangerous to stability. They have removed the Afro-Guyanese from government jobs, canceled and denied of government contracts, and desperation is rising because they people don’t want to see a return to the terror of early to mid 2000s of massacres and high death rates.

Question: How was the President received in Washington?

On the eve of the Guyanese President, Dr. Mohamed Irfaan Ali of the People’s Progressive Party/Civic (PPP/C) and former President, now Vice President, Bharrat Jagdeo, and Foreign Minister, Huge Todd’s visit to Washington, a self-identified PPP/C government spokesperson, Ossee Rogers, attacked U.S. Congressman Hakeem Jeffries stating the Chairman of the Congressional Democratic Caucus should not be taken seriously. The administration should have denounced his statements and admonished him immediately, unfortunately, that was not the case. The visit to Washington, D.C., could have been one of cooperation but instead, the attack of the Chairman, Congressman Hakeem Jeffries, may or may not have led to the Chairwoman of the Congressional Black Caucus (CBC), Congresswoman Joyce Beatty, OH, declining to meet with President Irfaan Ali and his delegation even though being marshalled by Ambassador Sarah Ann Lynch, a holdover from the Trump Administration. President Ali’s delegation has been unsuccessful in getting meetings with many Members of Congress including Senate Foreign Relations Committee Member Bob Menendez (NJ), Congresswoman Alexandria Ocasio-Cortez of New York, and Republican Congressman Mark Green of Tennessee. Congresswoman Yvette D. Clarke (NY) and Congressman Hank Johnson (GA) have also been outspoken about the Ali administration in the past so it is not hard to believe they may be treated in the same manner as Congressman Jeffries.

In Guyana it is not uncommon for the government to use incendiary rhetoric which can be characterized as racist, anti-Black and anti-African Guyanese. The Members of the CBC did not tolerate this type of anti-democratic attack and the delegation was not well received. There is a lot of work to do by the government to build relationships with the Congress.

Questions: What does this mean for the Guyanese people especially the Afro-Guyanese?

Answer: The people of Guyana can take a page out of the playbook of the African-Americans. The Members of the U.S. Congress represent the American people from around the world living in their districts. Rep. Jeffries represents one of the most diverse constituencies in the United States. It is quite perplexing that a government with an abysmal record on human rights would launch such an attack then come to Washington immediately thereafter. The Guyanese people, though small in numbers, have the ear of the Congress by reaching out to the Diaspora. We need to learn that we are not living in a vacuum. This is an opportunity for Black people in Guyana and the Diaspora to highlight the discriminatory policies of the administration to bring about change, improve relations between the government and the Afro-Guyanese, and Guyana as a whole.

Instead of attacking Members of the U.S. Congress, President Ali should be launching an independent investigation into allegations of VP Jagdeo’s $500,000 bribery scheme with Chinese investors to get his house in order and alleviate the suspicion of corruption at the highest level of his government. The government of Guyana has a real opportunity to be in the forefront of change, growth, and development if they are ready serve all the people of Guyana and not the few.

Thank you very much Mr. Burke, at Manchester Report, we simply report the news, we don’t create the news.


EIN Presswire’s priority is source transparency. We do not allow opaque clients, and our editors try to be careful about weeding out false and misleading content.
As a user, if you see something we have missed, please do bring it to our attention. Your help is welcome. EIN Presswire, Everyone’s Internet News Presswire™,
tries to define some of the boundaries that are reasonable in today’s world. Please see our
Editorial Guidelines
for more information.