The archipelago of Guadeloupe in the French Caribbean is made up of half a dozen inhabited islands: Basse-Terre, Grande-Terre, Marie-Galante, La Désirade, and the two Îles des Saintes. Basse-Terre, the largest island, is home to the capital city, an active volcano, a national park, and a UNESCO Biosphere Reserve.

Several of the islands, including Basse-Terre and Grand-Terre, appear in these images acquired on April 4, 2022, by the Operational Land Imager-2 (OLI-2) on Landsat 9.

The island chain is part of the Lesser Antilles island arc, which formed when the Atlantic Plate was forced down under the Caribbean Plate during collision. This caused volcanic islands to erupt on the overlying plate, including the active stratovolcano La Grande Soufrière. The volcano is the highest point on Basse-Terre island, as well as in Guadeloupe and the Lesser Antilles, rising to 1,467 meters (4,813 feet) above sea level.

This Soufrière—not to be confused with other Caribbean Soufrières that have erupted recently, like La Soufrière on St. Vincent and Soufrière Hills on Montserrat—last erupted in 1976–1977. (In French, Soufrière means “sulfur,” so it is an understandably popular name for volcanoes.)

According to the Smithsonian Global Volcanism Program, La Grande Soufrière has experienced six phreatic explosive eruptions since 1690. The 1976–1977 eruption “caused severe economic disruption when Basse-Terre, the island’s capital city immediately below the volcano, was evacuated for several months.” The 1690 eruption opened radial fractures across the summit lava dome. Because those fractures resemble the folds of a dress, the volcano is sometimes referred to as the “Old Lady.” 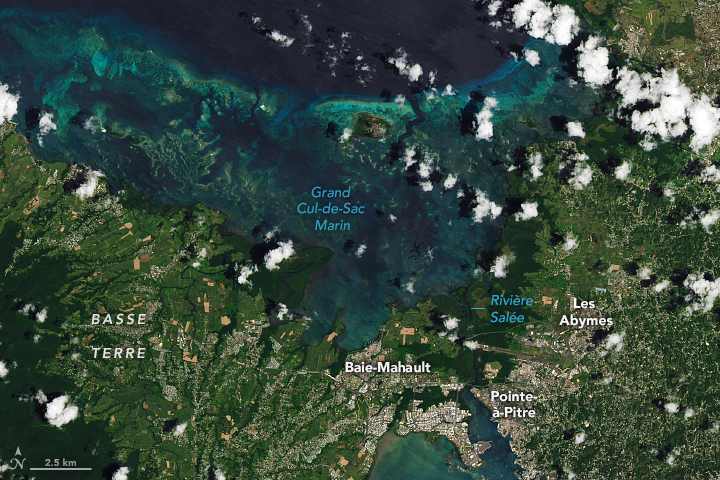 The Rivière Salée (salt river) separates Basse-Terre and Grande-Terre, as well as the towns of Baie-Mahault (mangrove bay) and Pointe-à-Pitre. The large, shallow marine lagoon, Grand Cul-de-Sac Marin, is home to the longest coral reef in the Lesser Antilles, as well as mudflats, seagrass beds, and mangrove forests. The freshwater swamps and marshes around the lagoon provide abundant habitat for nesting and breeding birds including pelicans, terns, and gulls.

In 2009, researchers found unusual white filaments, about the size and shape of an eyelash, attached to leaves submerged in the sulfurous waters of Guadeloupe’s mangrove swamps. The discovery proved to be a new species that is now recognized as the world’s largest bacteria.

Described in June 2022, the sulfur-oxidizing bacteria was named Thiomargarita magnifica. A microbe, by definition, is microscopic. But at nearly 1 centimeter (0.4 inches) long, these “macroscopic microbes” are visible to the naked eye (but not from space). Their appearance has been likened to pieces of vermicelli.

“It’s 5,000 times bigger than most bacteria,” said lead author Jean-Marie Volland in a statement. “To put it into context, it would be like a human encountering another human as tall as Mount Everest.”

Supermarket bandit dies with his Moet and money | News Extra