CinemaONE Chairman Brian Jahra told Loop News the opening of the Gemstone luxury theatres at Gulf City Mall was a long time in the making, beginning before the start of the COVID-19 pandemic.

He said: “I think it’s a blessing that we hadn’t finished everything, so it gave us a bit more liquidity to be able to kind of withstand extended months of downtime.

We were able to say that we had some capex (capital expenditure) to allocate towards sustaining the business over an extended period of time. Had it not been for our aggression to grow, maybe we wouldn’t be around now.”

As lockdowns eased and construction was permitted to restart, the CinemaONE team committed to ensuring the luxury cinema’s completion.

While some finishing touches are being applied to the box office and kitchen, along with the finalisation of the licensing process, Gemstone is on track to open its doors to South moviegoers toward the end of August.

Jahra said the team chose Gulf City because they liked the synergies of the mall and the kind of foot traffic it gets.

While CinemaONE has IMAX and 4DX theatres at One Woodbrook Place (OWP), due to the available space at Gulf City, Gemstone was determined to be the appropriate model.

Jahra said the theatres will be opened in two phases, beginning with colour-themed Sapphire and Ruby rooms. The two rooms have a combined seating capacity of 126 people.

The Amethyst, Topaz and Emerald rooms will be introduced in phase two.

One of the main differences between the Gemstone theatres at Gulf City is the seating capacity, which is more than what’s at the Port-of-Spain location.

Unlike the seating at the North location, moviegoers at the South location can enjoy an even more intimate, almost at-home feel with “love seats” in the first row, which give a supine viewing experience.

“Getting supine isn’t necessarily about having a different experience, because you also get a better viewing angle,” Jahra explained.

The fully reclining seats in the rest of the rows now feature double USB charging ports so you don’t ever have to worry about a low phone battery while you’re out at the movies.

“These are just some little comforts that we think people will love and make things a little better,” Jahra said.

The CinemaONE Chairman noted that the theatres have been equipped with laser-based projection technology, which enables a brighter, cleaner and crisper visual offering. 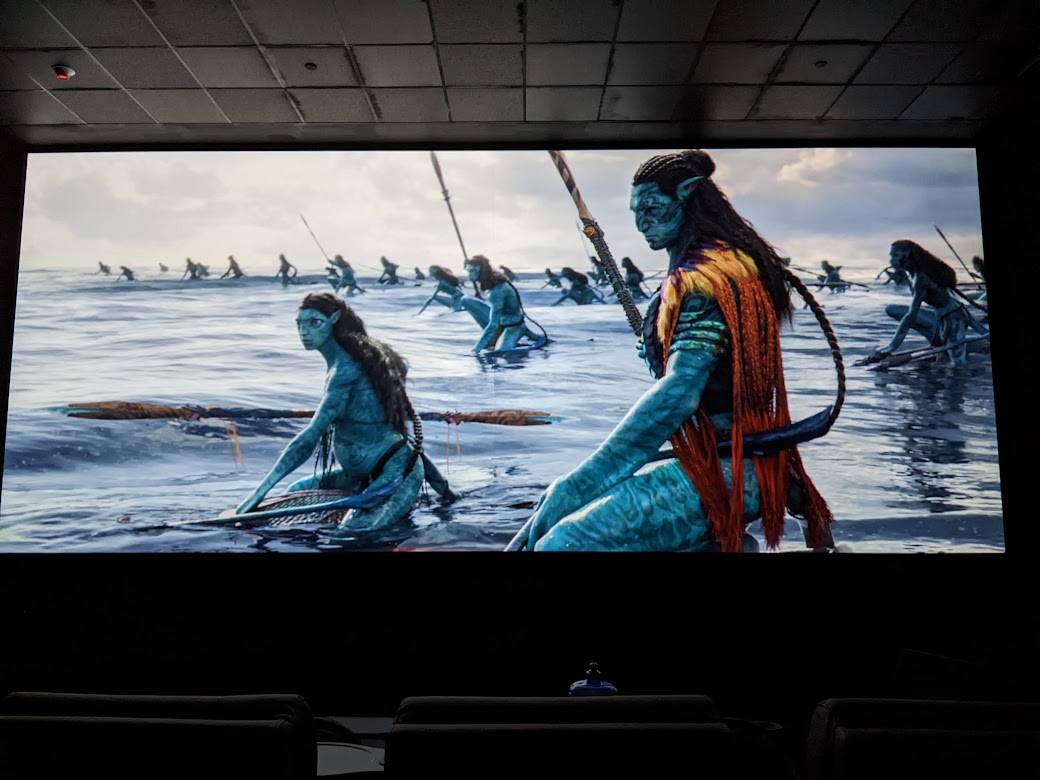 A scene from the trailer of Avatar: The Way of Water shown on the screen in Gemstone’s Ruby Room. Image by Darlisa Ghouralal.

When all screens are functional, Gemstone stands to employ as much as 50 members of staff.

Jahra said he’s looking forward to the response of South Trinidad, and added that he believes people are ready for the kind of moviegoing experience Gemstone has to offer.

The CinemaONE Chairman expects a positive response from the public, as market research has shown that people consuming content on streaming services are still coming out to the movies.

“I think South is very sophisticated, South is growing. We’re very excited to be a member of the Southern community,” he said.

“We have more movies coming up, more content and we’re really excited about the great films coming up, like Black Adam, Black Panther and Avatar: The Way of Water.”

The new Gemstone theatres are located on Gulf City’s sixth floor and will be unveiled to shareholders at the Annual General Meeting on August 12.