The decision Dominicans make at the upcoming general election will determine the next forty years of the country’s development. That’s the view of Dominica Labor Party candidate for the Soufriere constituency, Denise Charles.

Charles believes that as time progresses, opportunities with global friends and investment will be lost and not be regained. So, according to her, Dominicans should not “gamble their future”.

The DLP candidate was at the time addressing a Diaspora forum and she said the time for decisive action is now.

“We shall not gamble with our future, we are focused on building the new Soufriere and I’m encouraging my people to make an investment.  The future of our country so critical, as I have said this is not Showtime, HBO, or lifetime where if you don’t like the movie you can just flip the channel,” she warned.

Meantime Charles said Dominica is no longer looked upon as one of the least developed islands in the region, as the country has now rapidly increased its rankings.

“It took Dominica forty years after independence in 1979 to open the first 5-star resort and witness the construction of three major international brands- it took Roosevelt Skerrit led administration under five years to make that dream a reality,” Charles said.

And according to her, it took Dominica 28 years after independence to have an international cricket stadium and it took Roosevelt Skerrit led administration three years to make that a reality.

She said the nation and quality of life of persons is refining because of Skerrit’s strategic alliances.

Looking ahead, Charles said the government will commence the construction of two jetties in 2020, re-introduce yachting and create a relaxing experience for visitors from Pointe Michel to Scotts Head.

“We (government) have built over 34 homes for residents and have 150 more to construct as there are still families who require new homes and assistance for home repairs,” she said.

DEAR BELLA: Is my sister taking advantage of me?

Shirley S makes it to the semifinals for the first time and will join Tasha P, a former calypso monarch, as the only female competitors. Gregory “Karassah” Riviere who is a government senator and also a minister of government, makes history as being the first government minister to compete in a calypso show in Dominica. Fitzroy “Bingo” Leon a veteran calypsoian in his native St. Lucia made it to the semifinals also along with Hunter, Bobb, and Observer. Former journalist Nathaniel “Nadur” Durand is also a newcomer to the semis.

Phillip Gregory Alleyne the founder of the Dominica Cricket Umpires Association and Referees Association died at the age of 92 over the weekend at his home in Newtown.

Alleyne had been ailing for some time now.

In the early days, Alleyne played football in the position of a center forward for Notre Dame which was the leading team in first division football in Dominica. He also played for Thunderstorm and Arsenal. While playing for Notre Dame, he represented Dominica in two matches against the battleships HMS Snipe and HMS Glasgow. He also played club cricket as an all-rounder.

After retiring from actual play, Alleyne headed the Dominica Cricket Umpires Association for many years, until his retirement in 1995.

In football, he played a key role in the formation of the Referees Association and served as its president until his retirement in 1995. Alleyne has also served as an executive of the Dominica Amateur Sports Association (DASA) which was the umbrella body for sports back in the day.

He and Simon Roberts became the first two Dominicans to pass the exams to become first-class umpires in 1972.

He has also served as the Area Vice President of the West Indies Cricket Umpires Association with responsibility for the Windward Islands, an office he held until retirement.

Alleyne managed the Dominica football team –captained by Clem John — in 1965 when they went to St Lucia, and the national cricket team, captained by Augustus Gregoire, in 1969. As a cricket umpire, he officiated in two One Day International matches– WI versus Australia in St Lucia in 1978, and WI versus Australia (non-official series sponsored by Kerry Packer) in Dominica in 1979. He also officiated at 14 Shell Shield matches, standing with top umpires of the day.

In 2010, the Dominica Football Association honoured Alleyne with a Lifetime Achievement Award for his contributions to the sport. 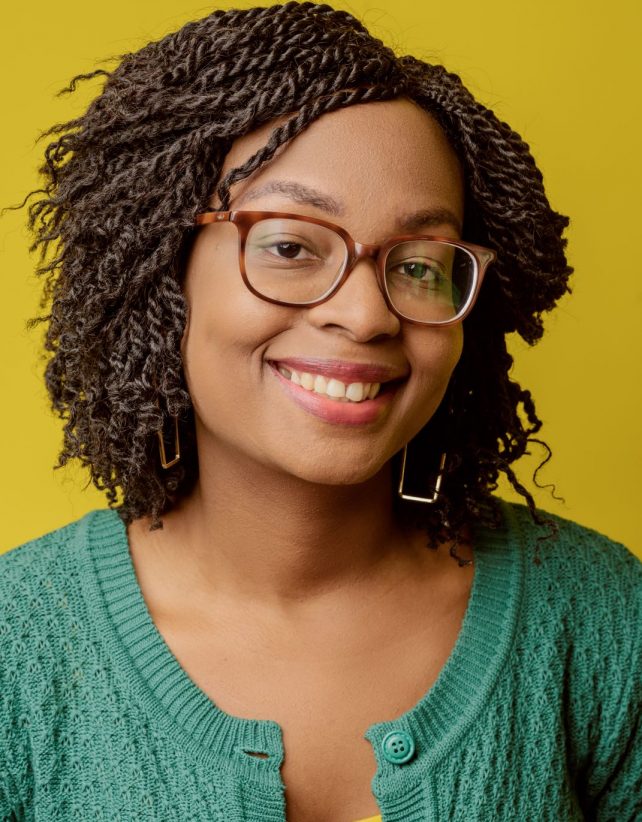 The Orlando Palmer Prose Prize 2019 for the best selected prose has been awarded to our very own Ms. Michelle Allyshia Belle, a Newtown-born Dominican native, for her submission: “Rude Awakening”, published in Interviewing the Caribbean literary magazine, spring edition, 2019 in Volume 4, Issue Number 2. At present, Michelle studies Psychology in China.

The Spring issue of the magazine was centered around the theme “Caribbean Femininity and Masculinity: Gender Justice”. Michelle’s story is based on a young boy who has had to move from his home in a rural village in Dominica to town, and his vicarious experience with domestic violence in the home. It also touches on the way domestic violence is received by the larger society, and its effect.

Miss Belle’s love for reading, which she did avidly from a young age, spiraled into an equal love for writing. Her work mainly focuses on themes such as Caribbean living, African roots and issues unique to the black community.  She has also won Dominica’s Independence Short Story competition in 2014 and 2015, and placed third in 2013, 2017 and 2019 respectively. 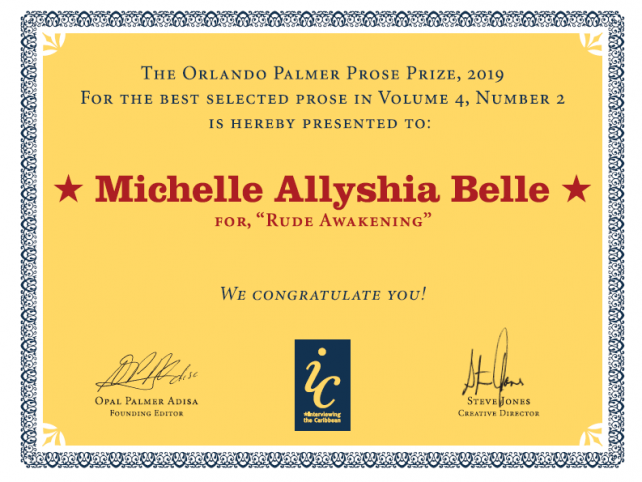 Michelle hopes that this award will give her more opportunities to share her literary works with the wider public and inspire other Dominicans to put out more of their literary products. She intends to seek an even wider audience by submitting works to more international avenues, and has hope for publishing her own book some time in the future. She recently had a poem published on a platform which shares experiences and achievements of black people in China. It can be read at the following link: https://blacklivitychina.com/2020/01/18/why-the-black-nod-exists-in-china-too/

Copies of Interviewing the Caribbean magazine which features Michelle’s story, Rude Awakening, may be purchased at: