United Kingdom parliamentarian David Lammy has turned down his selection to sit on Guyana’s Natural Resource Fund Board, government here announced on Tuesday.

Mr Lammy has been replaced by Guyanese Economics Professor, Compton Bourne who is a former President of the Caribbean Development Bank (CDB).

President Irfaan Ali did not give specific reasons for Mr Lammy’s decision to bow out of the NRF but hinted that it might be linked to UK Prime Minister Boris Johnson’s final week in office before his successor is announced on September 5. He resigned in July after he lost support from his parliamentarians.

“As we all know, the circumstances and environment in which he is operating has changed and due to changes in his requirement at home in the UK, he asked us not to have him play a part on this board at this time because it would not be in keeping with what his priorities are in the UK,” Dr Ali said in explaining Mr Lammy’s decision.

The President described Professor Bourne ” as an excellent replacement” who is well-respected regionally and globally.

Mr Lammy, who is Shadow Foreign Minister, was found to have inadvertently breached a parliamentary code of conduct for late declaration of financial interests.  The BBC reported on August 11 that Mr Lammy failed to register 16 interests on time, including payments for tickets to American football and boxing matches in London. Under code of conduct rules, MPs must register changes to their financial interests within 28 days. 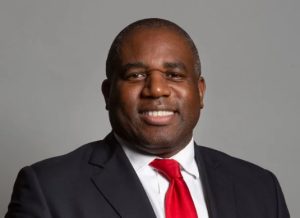 Dr Ali expressed confidence in the NRF Board- Chairman Retired Major General Joseph Singh, Guyana’s Permanent Representative to the United Nations Ambassador Carolyn Rodrigues, Professor Bourne, Dunstan Barrow, and Ramesh Dookhoo of the Private Sector Commission. “This board brings together experience in different fields. It brings together knowledge in different fields and it gives us, I think, a combined capacity and capability that would bring true value to the management of our oil resources,” he said.

The letters of appointment were presented to Shaleeza Shaw (chairperson), Michael Munroe, Richard Rambarran and Lauris Hukumchand of the Investment Committee. The Committee is responsible for advising the NRF Board on matters that concern investment of the oil funds, in a way that maximises the benefits to Guyana.

President Ali noted that Opposition Leader Aubrey Norton was officially asked for a nominee to the Investment Committee but “we are awaiting that nomination.”