Author offers an honest glimpse of contemporary life in T&T

Breanne Mc Ivor’s debut novel is a follow-up to the author’s 2019 offering, Where There Are Monsters, a collection of short stories that use traditional folklore as a vehicle for an account of contemporary life in Trinidad and Tobago.

In The God of Good Looks, Mc Ivor abandons the fantastical elements of Monsters for a compelling story more rooted in realism and depicts a modern society haunted by its colonial-inherited conservatism, exploring the blurred lines of class, notions of societal mobility, limitations placed on women, and what can happen when one dares to transgress the established parameters.

The novel tells the story of disgraced writer Bianca Bridge and fashion maven Obadiah Cortland, who join forces to bring to life their own versions of success while navigating a patriarchal and hierarchical society in which moral judgements are swift and damning, and money, beauty, along with the art of being well-connected are the keys to getting ahead.

The Commonwealth Short Story Prize finalist and winner of the Caribbean Writer’s David Hough Literary Prize discussed with Loop News the place from which she creates, her voice as a Caribbean writer in the 21st century, and the sheer thrill of signing with some of the world’s foremost publishing houses.

“A renaissance of Caribbean writing”

Mc Ivor’s depiction of contemporary Trinidad and Tobago places her among a new crop of writers whose work strives to present, within fictional worlds, authentic portrayals of life at home rather than the once-expected idyllic paradise, with its cultivated touristy charm.

The author explained that international publishers’ taste for these accurate portrayals is a fairly recent development, as she recalls requests to pander to stereotypes associated with the region when she first started.

“I don’t know what has changed,” she said. “Maybe in light of…many world events [there is the] increased awareness that everyone is not a monolith.” Mc Ivor stressed the importance of accurately portraying the region and the lessening pressure from publishers and agents to conform to the clichés.

“You still do meet people [whose] impression of Trinidad or even the Caribbean is a sort of ‘sun, sea and sand’,” she said. “I love to write about my Trinidad, my world, and over time, I feel like there is more space for that.”

Mc Ivor, in reference to her own upcoming novel, along with those of contemporary Caribbean authors such as Monique Roffey (The Mermaid of Black Conch) and Celeste Mohammed (Pleasantview), spoke of “a renaissance of Caribbean writing”, with publishing houses and an eager readership displaying a newfound appetite for more diverse and nuanced depictions of the Caribbean, particularly through the eyes of women writers.

“Monique Roffey and Celeste Mohammed…they are all so different and I think it shows how the Caribbean, despite so many giants–the Walcotts and the Napiauls–there can be so much to excavate [that] there’s almost no overlap.”

Indeed, the region’s linguistic and cultural diversity can give birth to myriad stories, each its own refreshing discovery, and it is within this framework that new authors, such as Mc Ivor, can have their voices heard and amplified.

Liz Stein, Mc Ivor’s US editor for publishing giant HarperCollins, discussed being “thrilled” to be part of the author’s debut novel, and spoke about its content, which she describes as, at once, distinctive yet having a wide appeal.

“On the surface, The God of Good Looks seems like a light read,” Stein said, “but underneath, there’s tremendous depth and sharp insights into so many issues concerning women today: beauty standards, the expectations we place on ourselves…reputations and ostracism, classism and social norms, and power dynamics.”

She explained that, through its various layers, the novel is both accessible and profound, with a cross-cutting relatability that transcends culture, while being true to its Caribbean roots.

“While the issues portrayed in the book are representative of Trinidad, they’re also universal ideas that are relatable [to] readers everywhere, especially the book club audience here in America.”

Stein’s endorsement of the work certainly bodes well for its premiere and the satisfaction of its readership and, in turn, for Mc Ivor, whose star as a writer appears to be very much on the rise.

Dreaming the world of her characters

Mc Ivor said that the plot for The God of Good Looks first came about when she was commissioned by the Bocas Lit Fest to write for their Inspired by the Archives series, where a team of writers were sent to peruse the works of the Caribbean literature section at UWI’s Alma Jordan Library with a view to developing their own pieces based on writing that stood out to them.

She felt drawn to Sir Derek Walcott’s personal notebook of musings and essays and, inspired by a self-interview, Mc Ivor came up with an early version of the image-obsessed world of Bianca and Obadiah in her short story.

Setting aside doubts and thoughts of whether a story on “makeup and the fashion industry [would] seem silly,” Mc Ivor’s words, when read aloud at the event were met with warm reviews and praise, with admirers acknowledging the originality of her chosen topics explored within a Caribbean context.

In the months that followed, she developed other work, most notably, Where There Are Monsters, but said that the little world she had dreamed up, along with its characters “wouldn’t let me go.”

“My two main characters, Bianca and Obadiah, felt very much like real people,” she said. “I wanted to know what happened to them, and the only way to do that was to write this story.”

Mc Ivor gave some brief insight into her technique, explaining her character-driven approach that involves “a lot of free writing” and that she refers to as “experimental”; she would go about “putting my characters in various situations and letting them get themselves out.”

The more she wrote, the deeper Mc Ivor delved into her characters’ heads, exploring their motives and understanding how the society in which they lived was likely to react to their choices. “Even when I wasn’t writing, they’d be there in my head,” she recalled.

The author explained that her characters are a “sort of composite”, drawn from aspects of many people’s personalities, at times, even her own. “There are parts of myself in both characters,” she said. 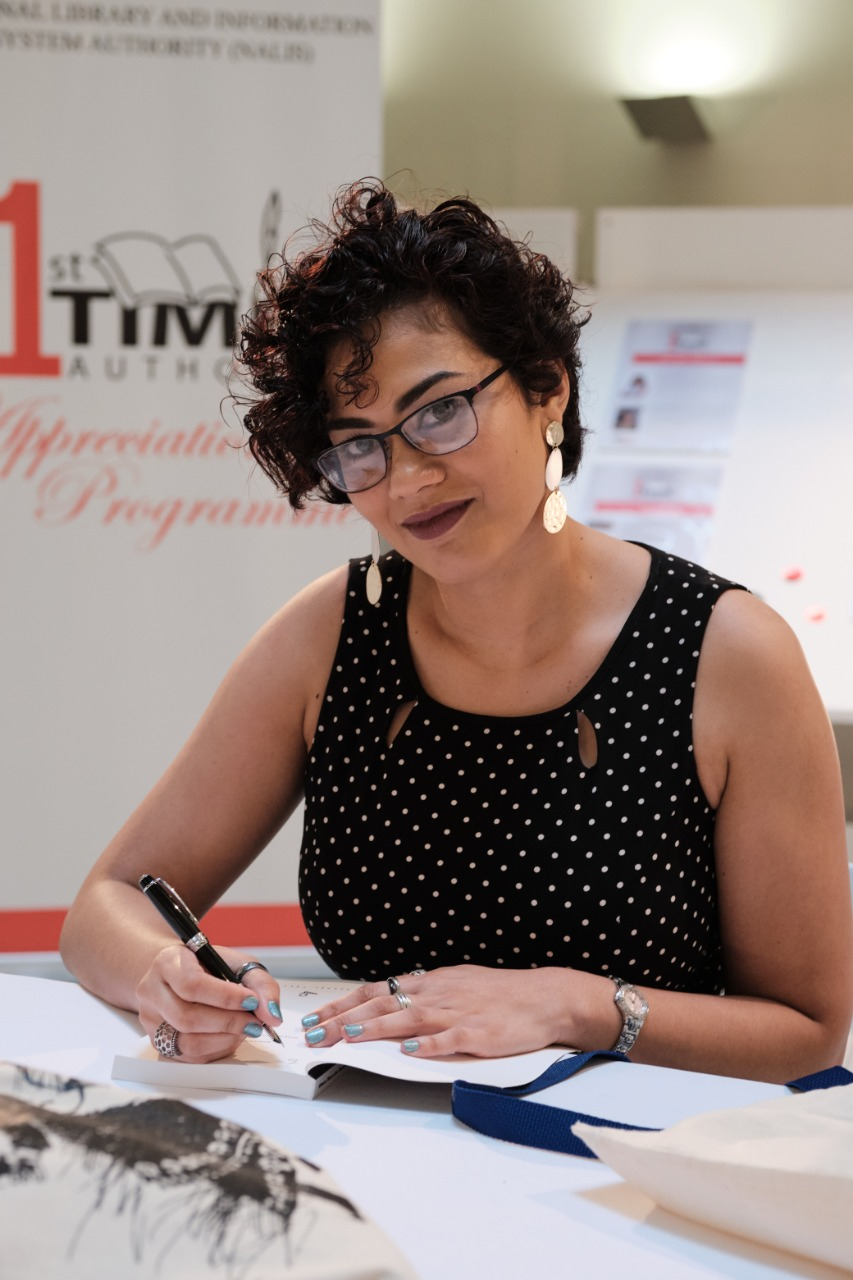 Writing about women in today’s society

The God of Good Looks also deals with the double standards in the way men and women are treated and the willingness with which society tends to overlook men’s blunders as compared to women’s. Much of Bianca’s arc explores how women take great pains to “recover…from the judgement”, while exploring how men “are forgiven so much more readily for mistakes.”

Much of Mc Ivor’s writing has, by her own admission, “a feminist slant”, drawn from the collated experiences of growing into womanhood in Trinidad, where “the shadow of colonialism” still influences our adherence to respectability politics and the way in which we relate to issues that involve women and girls.

The author said that her goal in writing is to ensure that she is “satisfied creatively” while knowing that she has touched her audience. Mc Ivor intends for the book to hold up a mirror to Caribbean people, particularly women, to see themselves reflected, and in turn, show the rest of the world “a different face of the Caribbean”.

The God of Good Looks is scheduled to be released in summer 2023 by HarperCollins in North America and Penguin Random House in the UK.

Check out Breanne Mc Ivor on Instagram to learn more about her writing and what inspires her creative process.

Clico goes after $11b from CL Financial

Tropical Storm Warning For Aruba But Passing Before Getting Named

Clico goes after $11b from CL Financial